Ward off the Evil Eye

This invincible collection is no less than a guardian angel that shields you from all the invisible yet prominent malevolent energies revolving around you and radiates a positive protective aura that aids you in touching new heights.
read on
Subscribe to Syna Stories 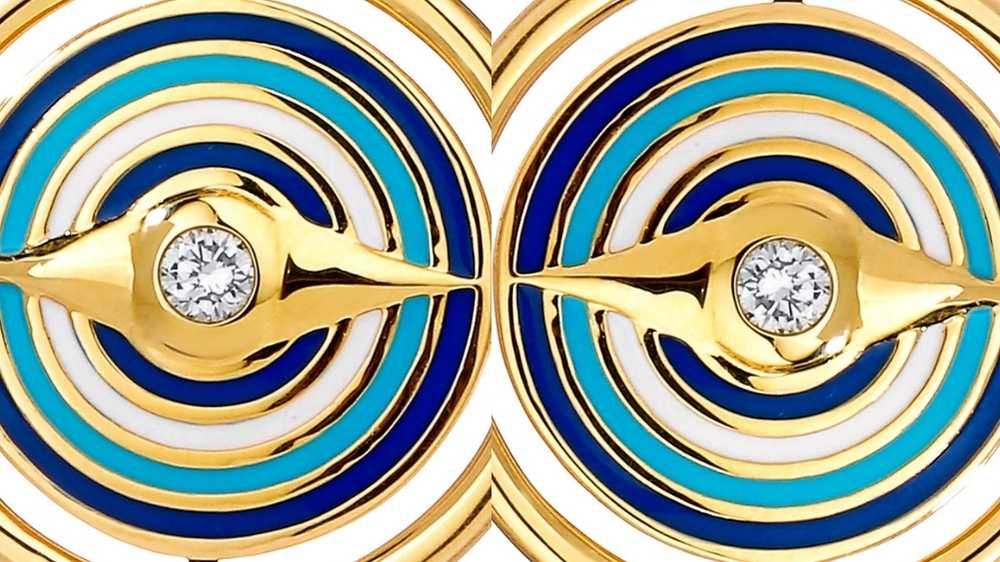 The world is a battlefield where each person is striving to get a step ahead of everyone he sees around him—envy sprouts from this inherent aspiration to outshine others. Therefore, legends, folktales, and the elderly warn us against being ostentatious about our successes as that attracts evil eyes, which are supposed to bring us misfortune.

The evil eye is basically a curse that is believed to be cast, usually by envious people with malicious intent. This belief is popular across civilizations and religions, including the Buddhist, Hindu, Christian, Jewish, and Muslim religions. It was, however, first recorded by the Mesopotamians 5000 years ago and is suspected of having had its origin during the upper Paleolithic age. Owing to that, talismans began to be created to ward off these negative energies and create a protective shield around people.

The eye talisman spread its roots from Egypt, where the Eye of Horus became a sacred symbolism. It is believed that the world was enlightened when Horus, the Egyptian God of the sky, opened his eyes, and on closing, it became dark again. So, eye-shaped talismans became the harbinger of protection against evil eyes.

If you are starting afresh or embarking on your dream journey, let our evil-eye pieces safeguard you. You might not always figure out the malicious eyes in the crowd, for they are of numerous types. Some might harm you without intending to, while some intentionally inflict injury through malevolent glares. The most dangerous one is the hidden or unseen evil. But the large evil eye reversible pendant will shield you from all the malicious energies in addition to taking your style up a notch. 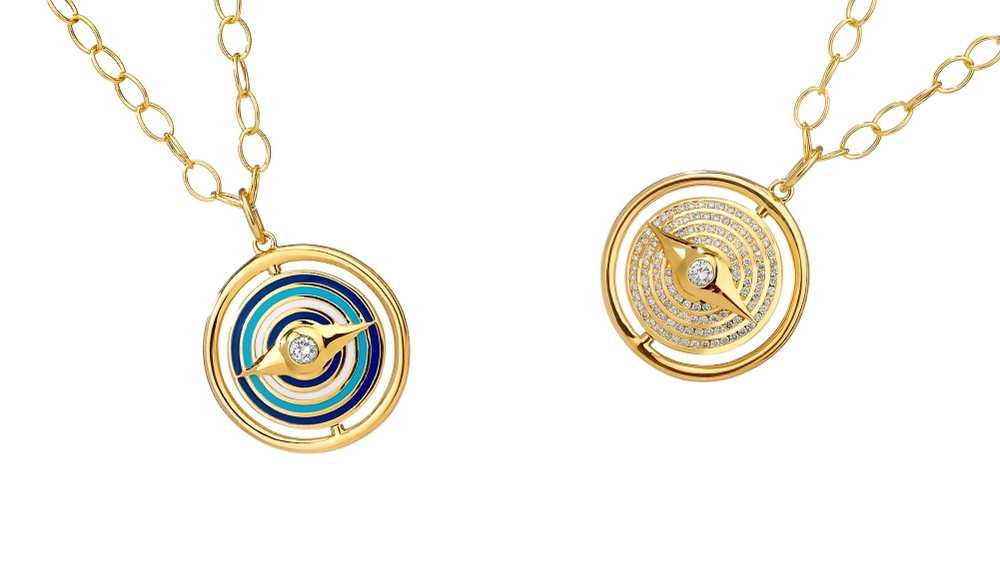 The pendant, which is a smart blend of modernity and tradition, is innovatively crafted. Both sides of it flaunt top-of-the-line artistry. One side portrays enamel detailing with concentric rings with alternating blue tones, the sky’s color, symbolizing truth and providing protection against the evil eye. The other side is meticulously sculpted with 18K gold and sparkling rings of diamonds. On both sides, you will find an eye amulet with a champagne diamond studded as the pupil.

With the Large Evil Eye Reversible Pendant, get ready to shoot two birds with one arrow. As you flaunt your simple, sophisticated style, go on achieving new milestones, being surrounded by a positive and protective aura.

Our evil eye comes in four other variations designed with caliber and precision to ward off the malicious evilness threatening to dismantle your life and guard you against the atrocity of the envy and jealousy waves.

The 18K yellow gold plated Evil Eye Flip Rings (in two sizes, large and small) gracefully wrap around your ring. Obtain and relish two looks with this cosmically inspired irresistible ring that celebrates the essence of the omnipotent evil eye motif. The champagne diamond embedded in the center sparkles like the stars of our galaxies. On one side, we present concentric patterns of diamonds that blaze and dazzle with glory, and one flip introduces the hypnotic infusion of azure and enamel details. 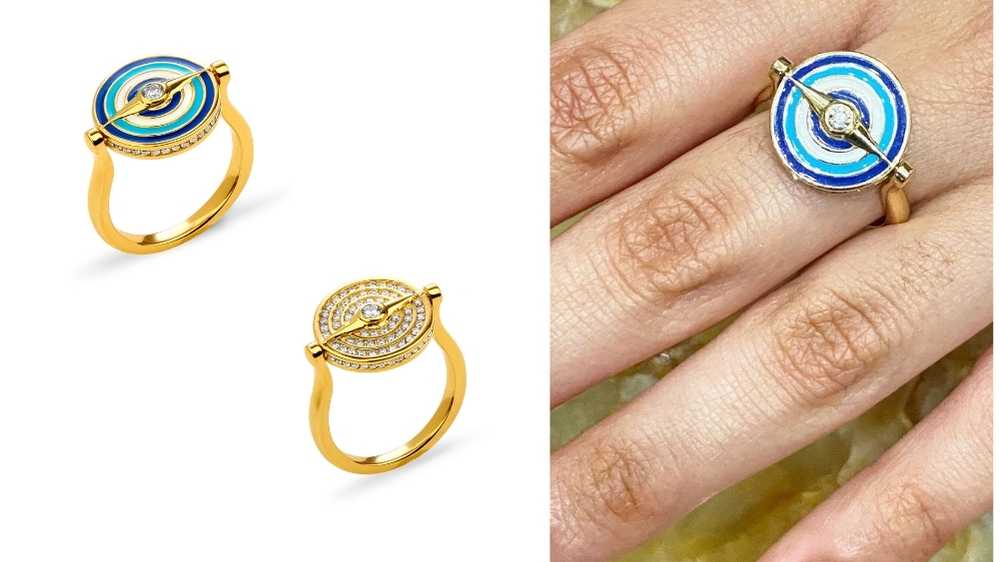 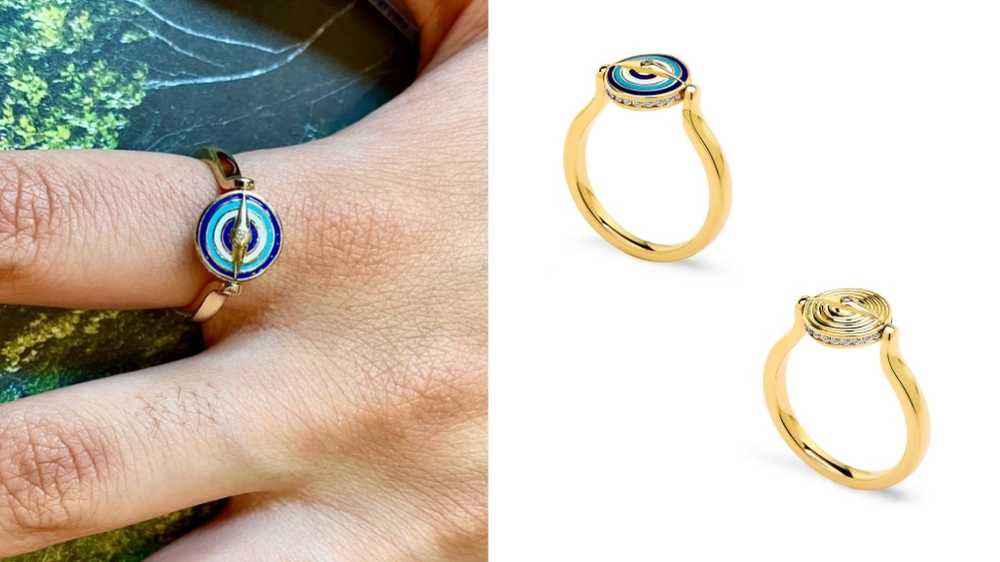 Relish the gold-forward look with the Small Evil Eye Reversible Charm that will perfectly suit your mood. We have revamped and switched the diamond rings with a simple yet alluring golden look, while another side still has the azure blue, turquoise blue, and white enamel details. 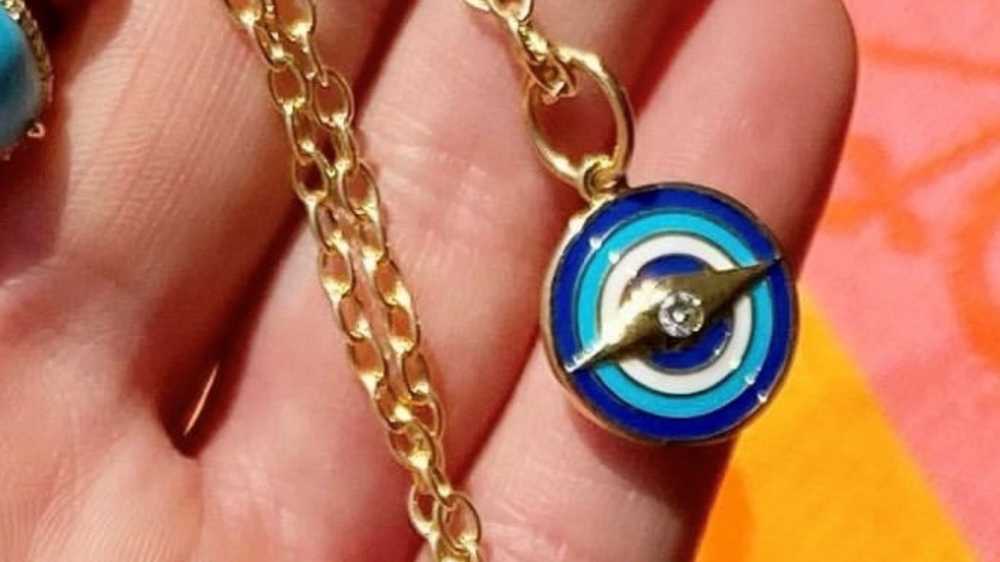 We also present to you the magnetic Evil Eye Bracelets duo of bracelets that augment the style statement. This powerful protective talisman safeguards against the prospects of misfortune and injuries. The sleek and elegant design is all set to grace your wrists with either the twinkling champagne diamonds plated in 18K yellow gold or the playful pops of the blue and white enamel that elevate the charismatic appearance. This bracelet unclasps with a hidden mechanism under the vibrant evil eye design that you can only unveil when you try out the wonders behind this piece. 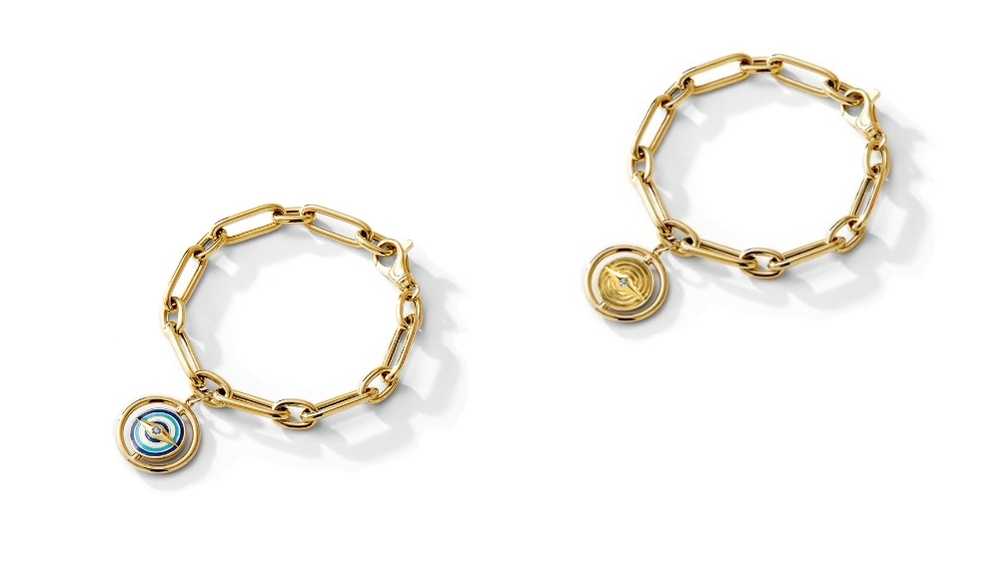 This invincible collection is no less than a guardian angel that shields you from all the invisible yet prominent malevolent energies revolving around you and radiates a positive protective aura that aids you in touching new heights. 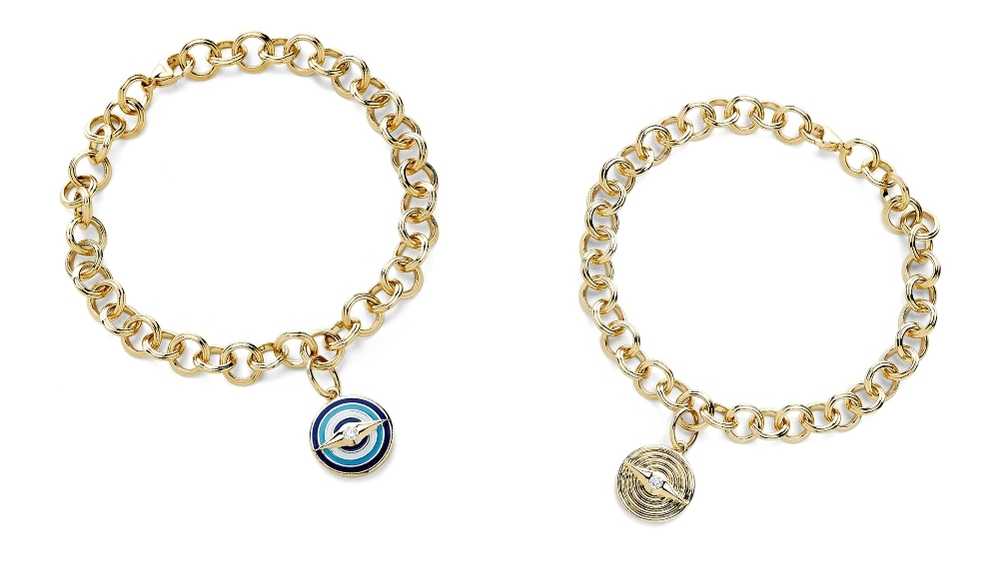 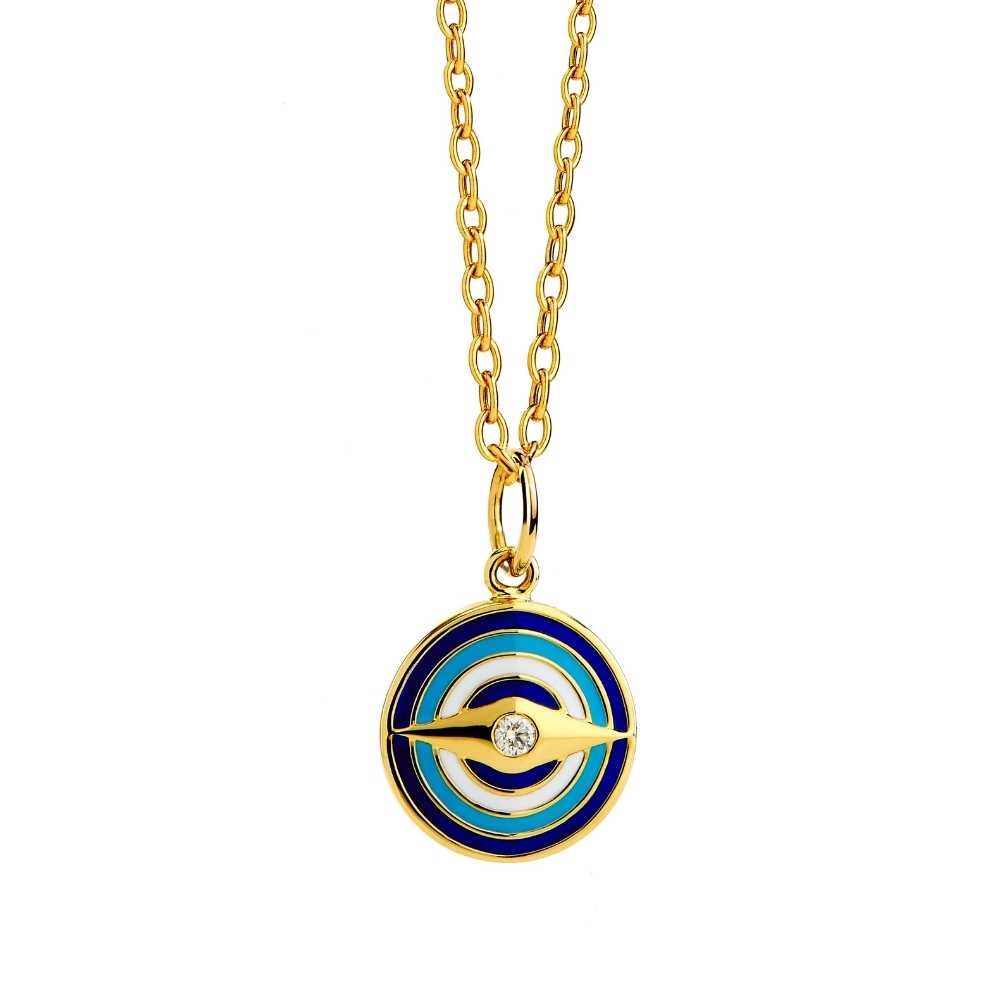