Topaz, A Talisman of Wisdom, Beauty and Longevity

A talisman of wisdom, beauty and longevity, many people in India have believed that Topaz worn above the heart assures long life, beauty and intelligence.
read on
Subscribe to Syna Stories

Topaz served as a symbol of strength among the Greeks. Europeans at the time of the Renaissance believed in its power to destroy curses and dispel anger. "Topaz" comes from the Sanskrit word "tapas" which means "fire". For centuries, many people in India have believed that topaz worn above the heart assures long life, beauty, and intelligence. In the past, a lot of people mistook any yellow-colored gemstones for topaz. "Imperial Topaz" named in honor of the Russian monarchy, is the distinct pinkish-orange hue discovered in the 19th century near the Ural Mountains in Russia.

This gemstone features a variety of colors, from colorless, light blue, yellow, orange, pink, violet, brown, and very rarely, red. The element of chromium causes natural pink, red, and violet to purple colors in topaz. Imperfections at the atomic level in the topaz crystal structure can cause yellow, brown, and blue color. Colorless topaz is plentiful and often treated to gove it a blue color. The rarest, and hence most prized color, is a vivid purplish pink.

Faceted blue topaz is almost always free of eye-visible inclusions. Other more rare colors like orange and pink may show inclusions more often and still be valuable due to the color's rarity.

The largest topaz mines are in Brazil, Pakistan, Russia, and Sri Lanka.

The vast majority of blue topaz seen today is the permanent result of changing the color by irradiation and heating. "Mystic Topaz" has an extraordinary rainbow effect and is made by coating colorless topaz with a thin artificial film placed on the surface by vapor deposition.

It is important to avoid steam or ultrasonic cleaners for topaz. Warm, soapy water works best. 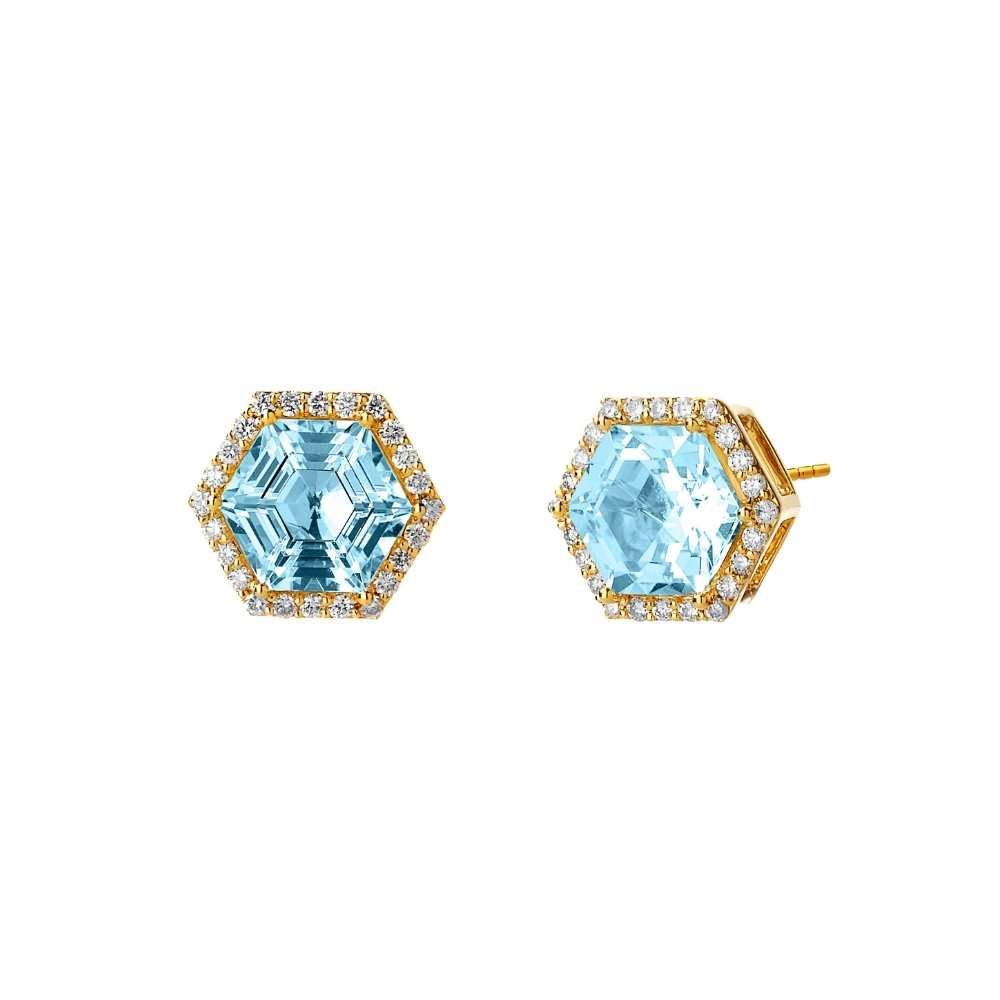 Buy the Blue Topaz Hex Studs with Diamonds I $ 2,100
Subscribe to Syna Stories