A Soft Guide to Gemstone Hardness

Hardness is defined as the ability of a gemstone to resist scratching and abrasion. Tenacity measures a material's resistance to blows. It is important to check both aspects when jewelry wearability is concerned.
read on
Subscribe to Syna Stories 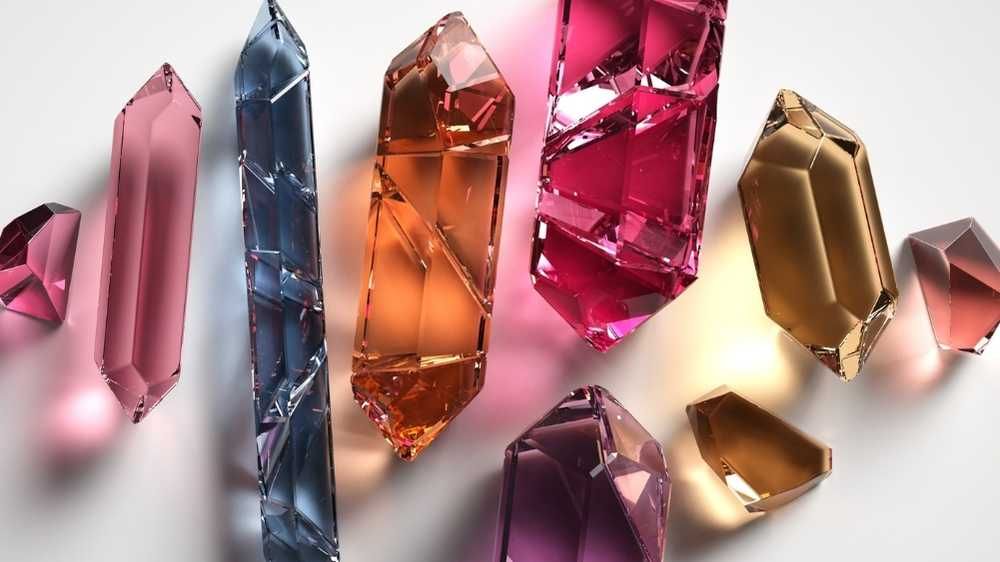 Diamond is the hardest natural material in the world. However, it is also brittle. Scientifically speaking, hardness measures the ability to resist scratching, nothing more. A gemstone’s overall wearability grade takes hardness into account. However, it’s only one of several factors to consider.

What Does Gemstone Hardness Mean?

Gemstone hardness is a very misunderstood property. The word “hardness” has a very specific scientific meaning in gemology that differs considerably from its everyday usage. The scientific definition of hardness is the ability to resist scratching, nothing more. If you ask most folks, they’ll say feathers are soft and glass is hard. In the world of gemology, however, glass is fairly soft. A variety of what gemologists consider hard substances could easily scratch it.

Hardness depends on the bonds that hold the atoms together within a crystal structure. This bonding is evident in the ease with which the layers of atoms at a surface can be separated by applying pressure to a sample of another material. If the second material is harder than the first, it’ll leave a furrow or scratch. That represents the breaking of millions of atomic bonds on a microscopic scale. The hardness of a mineral is, specifically, its “scratchability.” Every mineral can be ranked based on those other minerals it can scratch.

The Mohs Scale of Hardness

In 1812, the mineralogist Friedrich Mohs (1773-1839) established a reference scale of ten common minerals, ranked in order of increasing hardness. This scale, shown below, is called the Mohs scale of hardness.

Each of these minerals can be scratched by the one above it and will scratch the ones below it. Minerals of the same hardness will not scratch each other. Thus, a ruby cannot scratch a sapphire and vice versa. A diamond is much harder than a corundum, even though they are only one division apart on the scale. 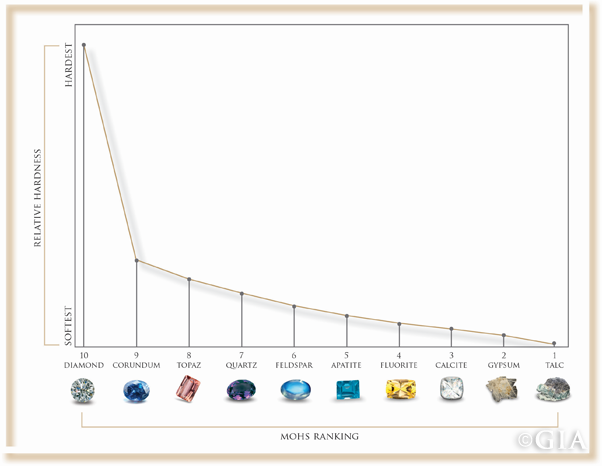 The Mohs scale starts approximately linear, but the curve climbs sharply at the high end. Corundum (9) is twice as hard as topaz (8), and diamond (10) is four times as hard as corundum. (Note: diamonds, and only diamonds, can scratch other diamonds).

The hardness of a material may vary slightly with composition and also with its state of aggregation. Measuring gemstone hardness can be tricky. Often, a mark that looks like a scratch is actually a trail of powder left by the supposedly harder material. Fractional hardness scores, like 5.5, are reported when the literature has indicated an intermediate value. However, it is really not critical whether the hardness of a mineral is 5 or 5.5. A hardness range is much more meaningful.

Going back to the old saying, a diamond is both hard, defined scientifically, and brittle. The steel of a hammer (hardness 5 or 6) won’t scratch a diamond, but it can shatter a diamond.

Tenacity measures a material’s resistance to blows. For gemstones, these measurements are usually given as descriptive terms. As it so happens, most gemstones would be considered brittle. There are a few exceptions. Cryptocrystalline quartz, such as chalcedony, has “tough” tenacity. Jade, both jadeite and nephrite, has “very tough” tenacity. 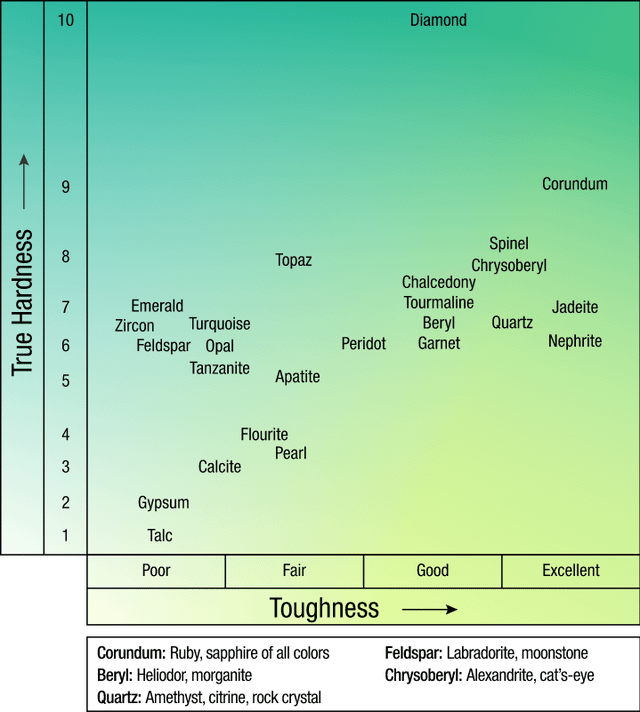 Assuming you don’t regularly bash your jewelry with a hammer, scratching is a hazard encountered more frequently. Think of how many times every day you put your hands inside pockets, purses, glove compartments, and desk drawers. Now think of what brushes against a ring when you do those things.

Gemstone hardness contributes greatly to the degree to which a gem will show wear. This is often referred to as wearability or sometimes “durability.” Opal with a hardness of 6 will be rapidly covered with fine scratches and lose its polish if worn every day as a ring stone. The scratches may be tiny, even microscopic, but they’ll accumulate and become visible over time. On the other hand, ruby with a hardness of 9 will remain bright and lustrous for years because it’s harder than most of the abrasive particles that contribute to wear. 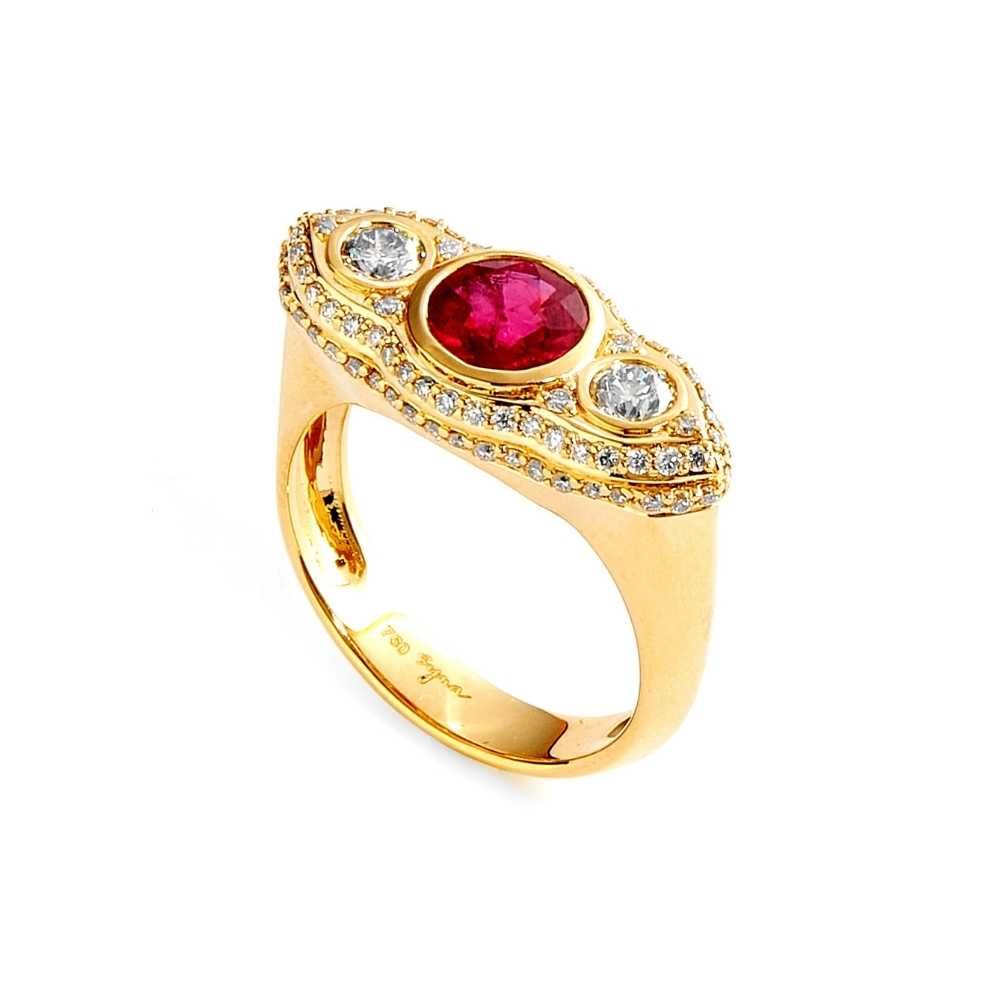